How can I tell if the tower on my property is structurally sound? It’s rusted.

Do you have the same question? Follow this Question

Rust or corrosion typically is discussed in terms of 3 stages.

Stage one or first degree corrosion is light surface rust that can be brushed off.

Stage two or second degree corrosion is more permanent, the metal debris and discoloration can’t be brushed off and the surface of the metal is pitted or starting to pit.

Stage three or third degree corrosion, is considered the worst and along with permanent discoloration of the metal there is also heavy scaling rust that can be removed with a knife or fingers and disintegrated areas or holes in more than 50% of the base metal and heavy pitting. The photo here shows second degree corrosion. 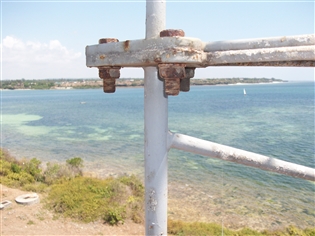